By EthanLin Posted on 12月 4, 2016 Leave a Comment on CAR T-Cell Therapy: Engineering Patients’ Immune Cells to Treat Their Cancers

For years, the cornerstones of cancer treatment have been surgery, chemotherapy, and radiation therapy. Over the last decade, targeted therapies like imatinib (Gleevec®) and trastuzumab (Herceptin®)—drugs that target cancer cells by homing in on specific molecular changes seen primarily in those cells—have also emerged as standard treatments for a number of cancers. 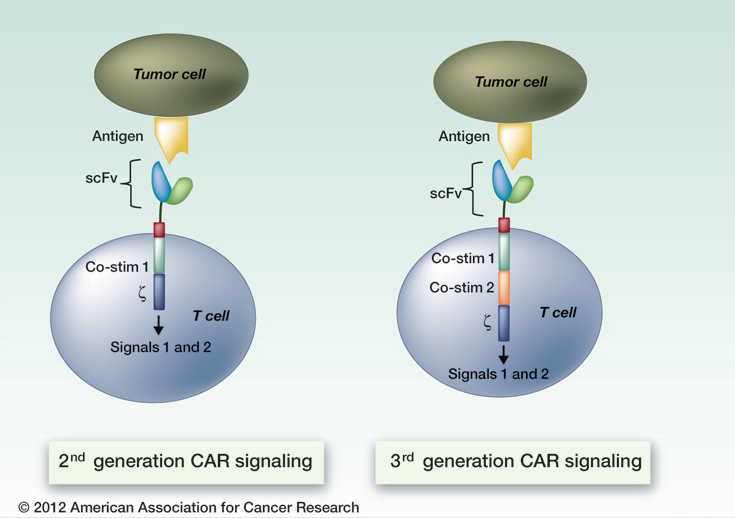 And now, despite years of starts and stutter steps, excitement is growing for immunotherapy—therapies that harness the power of a patient’s immune system to combat their disease, or what some in the research community are calling the “fifth pillar” of cancer treatment.

One approach to immunotherapy involves engineering patients’ own immune cells to recognize and attack their tumors. And although this approach, called adoptive cell transfer (ACT), has been restricted to small clinical trials so far, treatments using these engineered immune cells have generated some remarkable responses in patients with advanced cancer.

For example, in several early-stage trials testing ACT in patients with advanced acute lymphoblastic leukemia (ALL) who had few if any remaining treatment options, many patients’ cancers have disappeared entirely. Several of these patients have remained cancer free for extended periods.

These are small clinical trials, their lead investigators cautioned, and much more research is needed.

But the results from the trials performed thus far “are proof of principle that we can successfully alter patients’ T cells so that they attack their cancer cells,” said one of the trial’s leaders, Renier J. Brentjens, M.D., Ph.D., of Memorial Sloan Kettering Cancer Center (MSKCC) in New York.

That’s because ACT’s building blocks are T cells, a type of immune cell collected from the patient’s own blood. After collection, the T cells are genetically engineered to produce special receptors on their surface called chimericantigen receptors (CARs). CARs are proteins that allow the T cells to recognize a specific protein (antigen) on tumor cells. These engineered CAR T cells are then grown in the laboratory until they number in the billions.

The expanded population of CAR T cells is then infused into the patient. After the infusion, if all goes as planned, the T cells multiply in the patient’s body and, with guidance from their engineered receptor, recognize and kill cancer cells that harbor the antigen on their surfaces.

This process builds on a similar form of ACT pioneered by Steven Rosenberg, M.D., Ph.D., and his colleagues from NCI’s Surgery Branch for patients with advanced melanoma.

The CAR T cells are “much more potent than anything we can achieve” with other immune-based treatments being studied, said Crystal Mackall, M.D., of NCI’s Pediatric Oncology Branch (POB).

Even so, investigators working in this field caution that there is still much to learn about CAR T-cell therapy. But the early results from trials like these have generated considerable optimism.

CAR T-cell therapy eventually may “become a standard therapy for some B-cell malignancies” like ALL and chronic lymphocytic leukemia, Dr. Rosenberg wrote in a Nature Reviews Clinical Oncology article.

A Possible Option Where None Had Existed

More than 80 percent of children who are diagnosed with ALL that arises in B cells—the predominant type of pediatric ALL—will be cured by intensive chemotherapy.

For patients whose cancers return after intensive chemotherapy or a stem cell transplant, the remaining treatment options are “close to none,” said Stephan Grupp, M.D., Ph.D., of the Children’s Hospital of Philadelphia (CHOP) and the lead investigator of a trial testing CAR T cells primarily in children with ALL. This treatment may represent a much-needed new option for such patients, he said.

Trials of CAR T cells in adults and children with leukemia and lymphoma have used T cells engineered to target the CD19 antigen, which is present on the surface of nearly all B cells, both normal and cancerous.

In the CHOP trial, which is being conducted in collaboration with researchers from the University of Pennsylvania, all signs of cancer disappeared (a complete response) in 27 of the 30 patients treated in the study, according to findings published October 16 in the New England Journal of Medicine.

Nineteen of the 27 patients with complete responses have remained in remission, the study authors reported, with 15 of these patients receiving no further therapy and 4 patients withdrawing from the trial to receive other therapy.

According to the most recent dataExit Disclaimer from a POB trial that included children with ALL, 14 of 20 patients had a complete response. And of the 12 patients who had no evidence of leukemic cells, called blasts, in their bone marrow after CAR T-cell treatment, 10 have gone on to receive a stem cell transplant and remain cancer free, reported the study’s lead investigator, Daniel W. Lee, M.D., also of the POB.

“Our findings strongly suggest that CAR T-cell therapy is a useful bridge to bone marrow transplant for patients who are no longer responding to chemotherapy,” Dr. Lee said.

Similar results have been seen in phase I trials of adult patients conducted at MSKCC and NCI.

In findings published in February 2014, 14 of the 16 participants in the MSKCC trial treated to that point had experienced complete responses, which in some cases occurred 2 weeks or sooner after treatment began. Of those patients who were eligible, 7 underwent a stem cell transplant and are still cancer free.

The NCI-led trial of CAR T cells included 15 adult patients, the majority of whom had advanced diffuse large B-cell lymphoma. Most patients in the trial had either complete or partial responses, reported James Kochenderfer, M.D., and his NCI colleagues.

“Our data provide the first true glimpse of the potential of this approach in patients with aggressive lymphomas that, until this point, were virtually untreatable,” Dr. Kochenderfer said. [NCI Surgery Branch researchers have also reported promising resultsExit Disclaimer from one of the first trials testing CAR T cells derived from donors, rather than the patients themselves, to treat leukemia and lymphoma.]

Other findings from the trials have been encouraging, as well. For example, the number of CAR T cells increased dramatically after infusion into patients, as much as 1,000-fold in some individuals. In addition, after infusion, CAR T cells were detected in the central nervous system, a so-called sanctuary site where solitary cancer cells that have evaded chemotherapy or radiation may hide. In two patients in the NCI pediatric trial, the CAR T-cell treatment eradicated cancer that had spread to the central nervous system.

If CAR T cells can persist at these sites, it could help fend off relapses, Dr. Mackall noted.

CAR T-cell therapy can cause several worrisome side effects, perhaps the most troublesome being cytokine-release syndrome.

The infused T cells release cytokines, which are chemical messengers that help the T cells carry out their duties. With cytokine-release syndrome, there is a rapid and massive release of cytokines into the bloodstream, which can lead to dangerously high fevers and precipitous drops in blood pressure.

For most patients, trial investigators have reported, the side effects are mild enough that they can be managed with standard supportive therapies, including steroids.

The research team at CHOP noticed that patients experiencing severe reactions all had particularly high levels of IL-6, a cytokine that is secreted by T cells and macrophages in response to inflammation. So they turned to two drugs that are approved to treat inflammatory conditions like juvenile arthritis: etanercept (Enbrel®) and tocilizumab (Actemra®), the latter of which blocks IL-6 activity.

The patients had “excellent responses” to the treatment, Dr. Grupp said. “We believe that [these drugs] will be a major part of toxicity management for these patients.”

The other two teams subsequently used tocilizumab in several patients. Dr. Brentjens agreed that both drugs could become a useful way to help manage cytokine-release syndrome because, unlike steroids, they don’t appear to affect the infused CAR T cells’ activity or proliferation.

Even with these encouraging preliminary findings, more research is needed before CAR T-cell therapy becomes a routine option for patients with ALL.

“We need to treat more patients and have longer follow-up to really say what the impact of this therapy is [and] to understand its true performance characteristics,” Dr. Grupp said.

We need to treat more patients and have longer follow-up to really say what the impact of this therapy is [and] to understand its true performance characteristics.

Researchers are also studying ways to improve on the positive results obtained to date, including refining the process by which the CAR T cells are produced.

For example, Dr. Lee and his colleagues at NCI have developed CAR T cells that target the CD22 antigen, which is also present on most B cells, although in smaller quantities than CD19. The CD22-targeted T cells, he believes, could be used in concert with CD19-targeted T cells as a one-two punch in ALL and other B-cell cancers. NCI researchers hope to begin the first clinical trial testing the CD22-targeted CAR T cells in November 2014.

Based on the success thus far, several research groups across the country are turning their attention to developing engineered T cells for other cancers, including solid tumors like pancreatic and brain cancers.

The stage has now been set for greater progress, Dr. Lee believes.

NCI investigators, for example, “now have a platform to plug and play better CARs into that system, without a lot of additional R&D time,” he continued. “Everything else should now come more rapidly.”